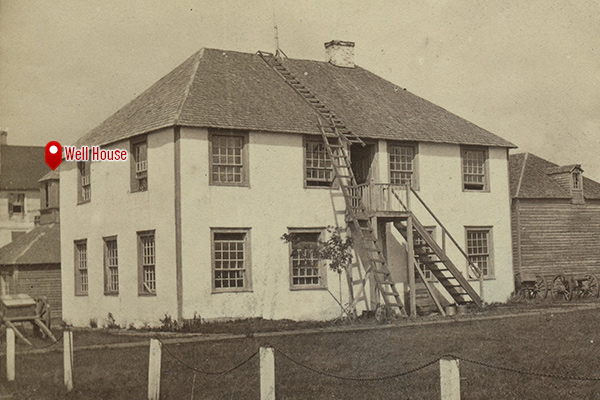 According to archaeologists, surprises often await at the bottom of well shafts. The well in Upper Fort Garry might contain old coins, burlap sacks, “hats a size too large,” and, according to one account, important historical documents. It is said that this particular well might contain land title records dealing with the Chelsea Pensioners’ river-lots, which would have implications for the ownership of land in this district. According to legend, the Hudson’s Bay Company servants dumped a box of papers into the well when Louis Riel and his followers took over the Fort in 1869! All of these items, of course, would be buried in Red River clay since the well was filled with mud in 1883 when the Fort was being abandoned.

Labourers, supervised by a Chelsea pensioner named Chart, dug the well in the newer half of the Fort in 1851. It was not the first time people tried to build a well in Upper Fort Garry. A few years earlier, a well had collapsed shortly after being completed. Diggers in 1851 learned from past mistakes and lined the inside of their hole with hewn stones to keep it from caving in. The well, which was about 42 feet deep, steadily filled with water in the following weeks, providing residents with “fine cool water.”  A year later, three carpenters constructed a ‘well house’ over the opening. The frame was roughly 16 feet square and 8 feet high with a hip roof. Later photographs also show a bell tower on the house’s roof which may have been the Fort’s fire alarm.